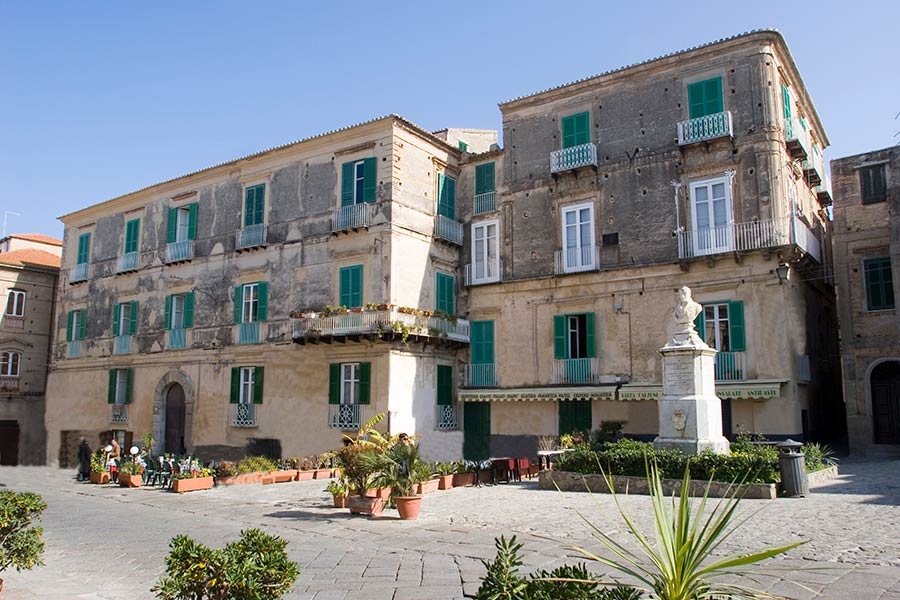 Start from Piazza Vittorio Veneto square: in the middle of the square you can see a monument dedicated to those who died during the First World War. It was given to the town in1926 by people from Tropea living in Uruguay. Walk a short way down along Corso V Emanuele High Street and take the first left into Via Umberto I, the old street where the blacksmiths once worked, and which was once outside the town walls. The street was created when the moat was filled up. You then come to Villetta del Cannone - a small square overlooking the sea – above the old viaduct which allowed access into Tropea through Porta Vaticana. Go along Via Indipendenza: in memory of the redemption paid to the Ruffa princes to whom Tropea was sold in 1612. It was once the main street of the town. We then come to Palazzo Gabrielli, once owned by the Pignatelli princes. This leads into Piazza Ercole square where we can find the Antico Sedile, the offices of the noble people of the town and of the Court of Justice or Bagliva, which is now the Tourist Information Office (Pro Loco). We can also see the monument dedicated to the philosopher, Pasquale Galluppi, who was born in Tropea in 1770. In Via Roma there is a commemorative plaque in rememberance of  the catastrophic earthquake of 27 March 1728 which happened at the time the Madonna of Romania procession was passing. Tropea was undamaged. In Largo Duomo square we can admire Palazzo D’Aquino (a lovely building with earthenware moulding and curved balusters), Palazzo Barone and Palazzo Zinnato with their splendid granite portals. The Norman cathedral has a Swabian door. After the demolition of the old town walls, a little square was created and allows a view of the sea, the port, the S. Leonardo rock and the marina area with its Saracen mills.  On clear days you can admire the entire coastline and the Sila mountains, particularly Mount Cucuzzo. Carry on along Via Boiano street where you will find Palazzo Braghò (with its splendid Baroque portal which dates back to 1721 and which stands out from the rest of the building: it is complex and lusciou, and distinguishes itself from the other eighteenth-century buidings with granite ashlars with diamond-shaped tips. Coming into Piazza Galluppi, you can see Palazzo Galli, Palazzo Tranfo, Palazzo Adilardi, Palazzo Fazzari, Palazzo Collareto, Palazzo Giffone (this nineteenth-century building, with its neoclassical atrium, is currently being renovated). At the end, you can find the seventeenth-century S. Francesco church, the Convento dei Minimi and the Capella of S. Pietro ad Ripas of 1400. In Largo Municipio you can visit the Chiesa del Gesù with its fine paintings and statues. Palazzo Di Tocco D’Aquino, where the philosopher, Pasquale Galluppi, was born, is just opposite. In Largo Gesuiti we have Palazzo Barone, Palazzo Parisi and Palazzo dei Duchi De Mendoza. We then come to Via Lauro street and Palazzo Adilardi, Palazzo Toraldo Di Francica and Palazzo Mottola. This then brings us into Largo Migliarese square where we can admire Palazzo Mottola Gabrielli.

We then come to the balcony overlooking the sea and the island with its splendid sanctuary. On very clear days, you can see as far as Palinuro and the seven Aeolian Islands. To the right we have Palazzo Barone (once a church, Chiesa di Santa Chiara, a convent, Convento delle Clarisse, and a hospital). Carrying on to the right we turn into Via Lepanto with Palazzo Toraldo-D’Amore and Largo Galzerano with Palazzi Toraldo (the two large entrances stand out and lead into bright entrance halls, terraced stairways and basements), Mazzitelli, Coccia and Di Tocco, with  excellent Baroque architecture. Walking along Via Vianeo street brings us back to Corso V. Emanuele main street and up to Porta Nuova where we can admire Palazzo Toraldo-Serra and where the castle with its tall Aragonese tower once stood. During the demolition of the castle, an early Christian cemetery came to light. The most important collection in Calabria of Christian epigraphs of the fourth and fifth centuries was preserved here.